In this collated work attempt has been made to bring to fore the core socio-economic and political issues which are still troubling India like an albatross around its neck on which Dr. B.R. Ambedkar toiled his life to provide a safety valve not only for the emancipation of the depressed and oppressed classes of the society but for the whole country. India of the twenty first century needs to materialize the views and opinions of Babasaheb to establish internal peace and solidarity which will provide strength to face the challenges of globalization. The structural fallacy, the deriding social configurations, the intolerable attitude, the legacy of rage which Ambedkar had opposed tooth and nail and tried to spread consciousness has been discussed threadbare here and an attempt has been made to deliberate upon different facets of Dr. Ambedkar's views, ideas, thoughts and opinions which have relevance even today in a multi cultural, multi faith, caste and gender oriented society of India. This book will be of immense help to researchers, scholars, students and the general readers as a whole. 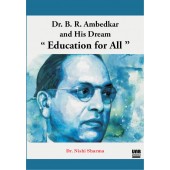